I’ve been sitting on this for quite a while, and I’m not exactly sure why – time to swallow all my insecurities and just share it!

In February, I traveled with some friends (#shoutout Julie, Biff, and blog-less Maya) to Ramallah to film a piece on the West Bank village of Taybeh and Taybeh Brewery. This is the result.

How long must I wrestle with my thoughts

and day after day have sorrow in my heart?

The Light in Her Eyes

“A woman is a school. If you teach her, you teach an entire generation.”

Last week, Film Forward, a U.S. Department of State sponsored initiative that brings acclaimed movies from the Sundance Film Festival to cities all over the world, hosted a showing of The Light in Her Eyes in Amman. It is the story of Houda al-Habash, a woman who runs a Qur’an summer school for girls in Damascus. The program is rigorous, the professors are meticulous—they coach the girls on everything from pronunciation of the words to conveying the heart behind the message. Houda is herself an expert on Islam; her goal is to imbue a sense of knowledge of the divine within her impressionable students. She wants to teach them piety, the true meaning of worship, and their rights within their faith. In the film, a stark contrast is made between the teachings of Islam and “customs and traditions”—which, in the Arab world, have become “a cage that imprisons us all.”

I initially approached the film with trepidation. I did not know what to expect in a documentary about a Muslim preacher and her Qur’an school for girls. I say this delicately, as an Arab Christian, it often feels like Islam and being Arab are inextricably linked. The majority of contemporary portrayals of life as an Arab (or Arab-American, in my case) rarely address the multiplicity that comes with having roots in this storied region. They fail to recognize that culture and place are not tantamount to any faith—one characterizes and defines, the other transcends. When my family members pray, we use the word Allah, too. I was selfishly worried about damage to my own self-identity. I wondered if I would leave the screening with a heightened, discouraged sense of how the world sees the aggregate Middle East.

Instead, I left with a profound appreciation of the honest storytelling within the film.

Houda is human. She is neither a stereotypical submissive Muslim woman, nor will viewers find within her a champion for western values and ideals. She encourages her female students, yes. But Houda does not fit within the archetypal lines of a feminist, in a religious context or otherwise. She stresses the importance of being a good wife and mother, she tells the camera that if her husband finds himself at home one day, it would not be acceptable for her to venture out and go to work. I found myself yo-yoing between exasperation at her antiquated values and swells of inspiration when I witnessed the power she entrusted to her young students. In a world where a path towards religious devotion (for any woman, in almost any Abrahamic faith) is seen as synonymous with a walk towards a cessation of freedom, it is refreshing to witness Houda’s insistence that study of the Qur’an is empowering for girls.

“For a woman, the Qur’an is protection,” she firmly states. “The Qur’an can teach a women her rights so she is not misled in a culture-based society who might not value these rights.” Houda tells the wide-eyed girls staring up at her at the end of the summer that they are free. She leaves them with a sense of agency within their faith that is too often absent within conservative spheres of Islam.

The documentary was filmed right before the uprising in Syria, which adds an element of abject sadness to the story. As the screen fades to black at the end, we find out Houda and her family no longer live in Damascus, they have moved to the Gulf. We know that the city no longer looks the way it was captured in the film. We wonder if the resplendent young girls we witnessed laughing and playing are even still alive. Our hearts break as the credits tell us what we already know: this story is no longer, it is frozen in time. During the question-and-answer session after the film, Director Laura Nix fought back tears—“I hope one day, you can go home,” she said to the myriad of Syrians in the audience. Person after person thanked her for capturing and sharing this story. Audience members of all faiths and backgrounds spoke about their views on The Light in Her Eyes. Some were critical, some had only lavish praise. All were grateful. 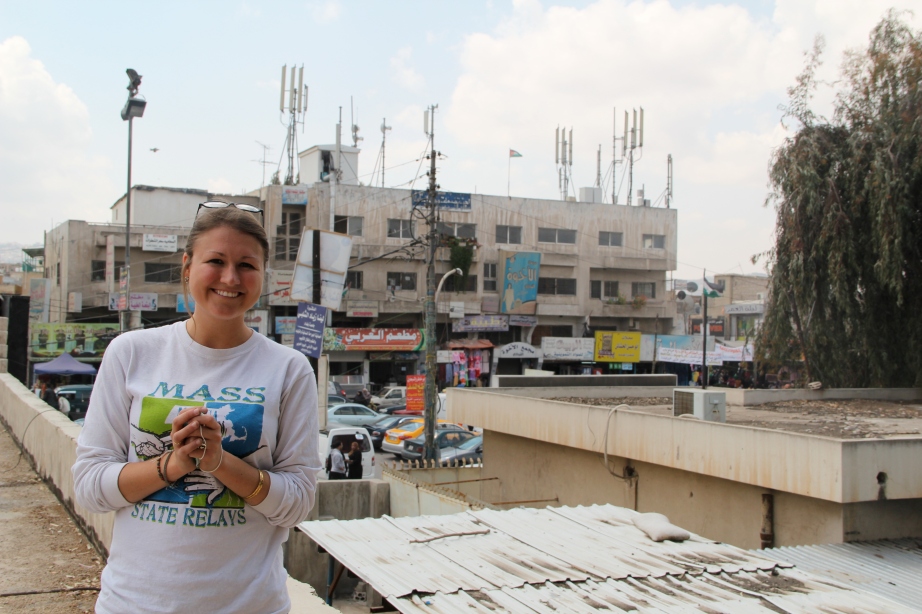 Julie in her favorite place – the OWA in Baqa’a.

Give Me Everything (Tonight)

About a week ago, I went to an engagement party and somehow ended up in a choreographed dance at the beginning (thanks to Julie). I’ve had a lot of unexpected moments here, but I never thought I would be voguing to Pitbull at a Jordanian engagement party. But, it happened.

The beginning was fatefully caught on film, and it is with great pride and a little embarrassment that I show it to you all:

I’m not going to force some theory on a mystery and make foolishness of it, just because that is what people who talk about it normally do.

I recently watched a sobering and well-shot documentary about six Syrian activists who risk their lives daily to capture and broadcast footage of the war.

You can watch it for yourselves here

It’s mid-April and I’m officially awful at keeping track of time, and updating this blog o’ mine. Better late than never though, riiiiight you guys?

Ok. Nonetheless, life has been fun and exciting lately – punctuated by brief and minor breakdowns about next year. I’ve finished the mini-documentary I’ve been working on and I think it’s decent for a first try. My internship with USAID has ended. Jordan is…the same. It’s getting hot and dry again. The mosquitoes are coming back, much to my chagrin. Teaching is fine; mashy el haal, as they say here. The other day, I had a really funny classroom interaction that I’ll try and describe in writing, although it’s admittedly funnier when told aloud.

The scene: post-class on Thursday, a few students are left over, one of them is M*. A student of mine from another section, Q*, comes bursting through the door.

Q: (Pointing at M) Doctora doctora, he cannot differentiate between “p” and “b.”

M: (Clearly irritated) Yes, I can! (Wildly gesturing to the student sitting next to him) Abble bie. Abble bie!

For the record, I try and keep things strict in class. I don’t smile often because I like students to think I am stern and foreboding – it’s all a ruse. But in this instance, I lost it. I could not hold back my laughter and I worried that M would think that I was laughing at him, rather than just the hilarious form the accusation took. But I reassured M that his English accent is stellar, and not to worry. Being a teacher is like an acting performance every single day.

*names have been omitted, because I’m sure that would violate something.

Just tell me if you’re getting tired of these Turkey pictures. Because I’m not. When can I go back?